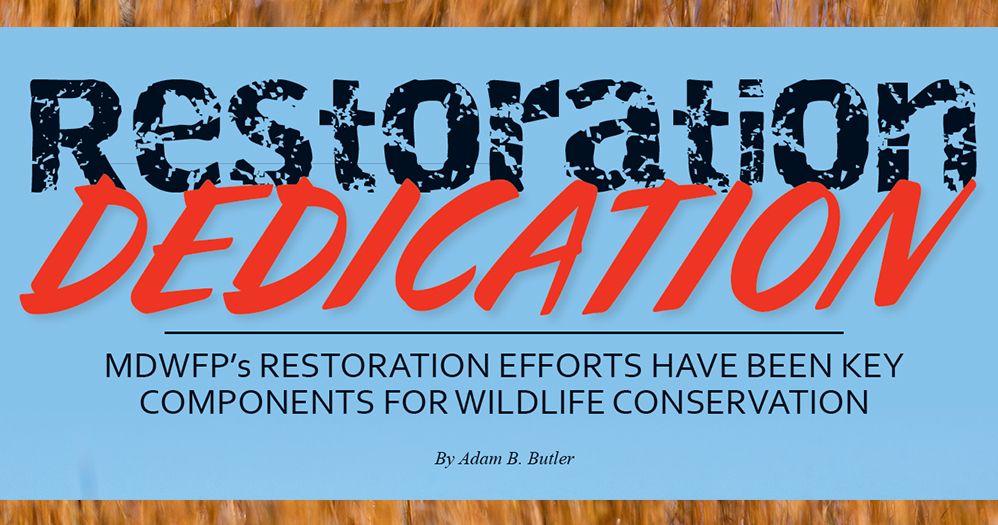 For a moment, close your eyes and think back on your favorite hunting memory. Maybe it is from high on a ridgetop stand with your grandfather. Or is it the earthy smell of fall all around and just enough north breeze to swirl autumn’s last leaves past the craggily old oaks down below?  Or is it a frosty January sunrise in a duck blind with your kids?  My own favorite hunting memory unfolded in a hardwood bottom on a Wildlife Manage-ment Area in central Mississippi and involved a spectacular day of turkey hunting with an old friend.

These memories—the deer, the ducks, the turkeys, and the places that frame their backdrop—shape deep traditions and make sportsmen and women so passionate about the sport. Hunting is not a hobby—it is a way of living. Time immersed in the wild outdoors has a way of nurturing us that is unmatched elsewhere and creates specialties with those whom we share the experiences. It is no wonder that the astute naturalist, writer, and hunter Aldo Leopold opened his most famous work, “A Sand County Almanac,” with the line, “There are some who can live without wild things and some who cannot.…” If your life is fed by memories born in forests and fields, then you know on which side of that statement you fall. Given the weight these memories carry, we who cannot live “without wild things” bear a responsibility to never take for granted that our most treasured times afield were guaranteed. Tremendous foresight and effort were necessary to ensure the outdoor experiences that enrich us today could be available.

In truth, hunters are living in an age of plenty that was nearly unimaginable just a few generations ago. It is a unique story: North America is the only place where major game species were successfully pulled back from the edge of permanent loss and then restored to their former glory. Do not believe that? Then consider that when the Mississippi Game and Fish Commission, now Mississippi Department of Wildlife, Fisheries, and Parks (MDWFP), was formed in 1932, deer were only found in a little more than a third of the state’s 82 counties. Wild turkey numbers had dropped to less than 5,000 birds statewide. Continental waterfowl populations were fewer than half of what fills our skies today.

The Pittman-Robertson Act, which was approved by the U.S. Congress in 1937, established a program that is now known as Federal Aid in Wildlife Restoration. Since its implementation, the program has provided essential monetary support for the restoration and management of our country’s wildlife populations and the habitats on which they depend. An excise tax on firearms and ammunition, imposed at the manufacturers’ level, is the mechanism that has generated the stable, reliable funding which has made the program’s efforts unequivocally successful.

To be eligible to participate in Wildlife Restoration funding, a state must annually certify, to the Director of the U.S. Fish and Wildlife Service, the number of persons holding paid licenses to hunt in that state during the previous year.

A license holder only can be counted once, even if he holds several different types of licenses or buys several trip licenses during a license year. Trapping, commercial, and other licenses that are not for the express purpose of permitting the holder to hunt or fish for sport or recreation cannot be included. Also, licenses which do not return net revenue to the state may not be counted.

In an attempt to maintain equity among the states participating in the Wildlife Restoration program, a funding apportionment formula was developed. One-half of the formula is based on the ratio of the land area of each state to the total land area of all the states. The other half depends on the ratio of the number of paid hunting license holders of each state to the total number of license holders for all the states.

Among MDWFP restoration programs assisted by this funding are:

This program’s goal is to provide management to Mississippi’s statewide deer herd and offer the maximum outdoor recreational opportunity to the public without negatively affecting the resource. Biologists provide deer-related guidance to public and private landowners, conduct seminars, write articles for professional publications, conduct statewide disease surveillance, and develop deer research projects in conjunction with university researchers. The comprehensive Deer Management Assistance Program (DMAP) consists of data collection and cooperator education with which MDWFP tries to put the landowners/co-operators in a better position to manage their lands for a healthy deer herd, while maintaining habitat integrity.

Hunter purchases of state Duck Stamps are the driving force behind the MDWFP Waterfowl Program. Its goals seek to improve habitat and hunting opportunities on public and private lands throughout Mississippi. Free technical guidance is offered on private lands for landowners who are interested in help with wetland management and attracting waterfowl. MDWFP will provide recommendations on waterfowl habitat improvements, water control, plant identification and control, and even water-fowl hunting management. Other responsibilities include waterfowl habitat management recommendations on WMAs, avian influenza testing, flying aerial surveys, wood duck banding, and representing the interests of Mississippi sportsmen on fly-way and national committees. Through restocking programs beginning in the late 1950s, MDWFP captured turkeys from areas where they were abundant and released them into habitats where they were missing. This restoration work allowed populations to grow, but the turkey numbers are still low across most of the central Delta because of lack of habitat. Luckily, hundreds of thousands of acres of hardwood saplings have been planted since the late 1980s, and these areas are becoming suitable turkey habitat. Recently, the MDWFP Turkey Program implemented a restoration/research project to evaluate the feasibility of restocking turkeys into the interior Delta. By releasing radio-collared turkeys into central Delta study sites, a real-world experiment was undertaken to learn whether the birds could reestablish in this unique landscape. Wild turkeys once again demonstrated their adaptability, but the project suggested that hardwood plantations are no substitute for mature forest as turkey habitat until they reach approximately 30 years of age.

With the voluntarily purchasing of licenses, hunters can do what sport hunters have always done in our country. They can help shoulder the responsibility of ensuring that our wildlife resources and their essential habitats are managed for the benefit of current and future generations by financially supporting the most successful wildlife management program in history.

Adam B. Butler is the turkey program coordinator for MDWFP.