Paleontological research at MMNS is directed primarily toward those taxonomic groups occurring in fossiliferous deposits of Mississippi that have been understudied in the past. Such groups include echinoderms, freshwater turtles, dinosaurs, and an extinct family of sharks occurring in "dinosaur age" deposits of northeastern Mississippi. 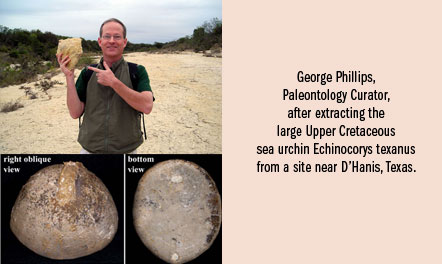 Echinoderms
The invertebrate group including echinoids (urchins & sand dollars), crinoids (sea lilies), asteroids (sea stars), and ophiuroids (brittle stars), occurs in deposits of Cretaceous through Oligocene age in Mississippi. Most of the active echinoderm research in the MMNS program is directed toward Cretaceous echinoids, for which the Paleontology Collection contains several important specimens called  holotypes-the actual fossil specimens upon which new scientific names are based. New species and species occurrences of surface-dwelling echinoids, like cassiduloids, and burrowing echinoids, or spatangoids, are in the process of being documented. 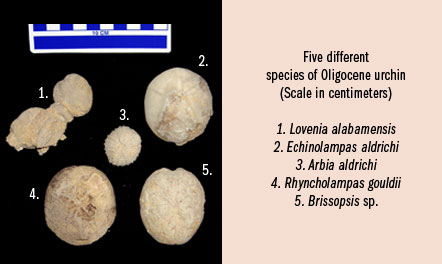 Freshwater Turtles
Freshwater turtles of Late  Pleistocene age occur in northeast Mississippi and in and along the Mississippi River. Fourteen freshwater turtle species are known from Late Pleistocene, or "Ice Age," deposits in the  Golden Triangle area of northeast Mississippi. They include two cool temperate species,  Glyptemys insculpta and  Emydoidea blandingii, and the warm temperate gopher tortoise-Gopherus polyphemus, as well as species of  cooters (Pseudemys),  slider (Trachemys),  box turtle (Terrapene),  softshell turtle (Apalone), musk turtles (Sternotherus), snapping turtles (Chelydra &  Macrochelys), and an extinct giant tortoise (Hesperotestudo). As expected, the Ice Age turtle assemblage of the Mississippi River is quite different from that found in sediments deposited by the much smaller streams of the Golden Triangle, which lies in the  Black Prairie District.

Dinosaurs
During the Age of Dinosaurs, Mississippi was largely submerged beneath a shallow arm of the Gulf of Mexico extending up the Mississippi River Valley to the southern tip of Illinois. This extension of the Gulf, or bay, is called the Mississippi Embayment. Dinosaur remains are occasionally found in northeast Mississippi, where deposits of that age are not completely covered due to subsequent flooding of the Mississippi Embayment. Although dinosaurs never inhabited the ocean, carcasses frequently drifted out to sea due to storms and ocean-bound river flow. As the carcasses floated along due to the gases produced in their bloating gut, sharks and other sea creatures fed on them, slowly disarticulating the skeleton. This is one of the reasons why dinosaur bones in marine deposits are typically found individually (and not as complete skeletons) with bite marks all over them. A fossil collector from Columbus, Mississippi, donated to the Museum a juvenile hadrosaur (duck-billed dinosaur) upper arm bone with the tips of three shark teeth embedded in it! The serrated teeth belonged to the scavenging shark Squalicorax-the extinct crow shark and Cretaceous equivalent of the tiger shark (Galeocerdo). Other species of dinosaurs from Columbus and Amory include the armored nodosaurs, "bird mimic" ornithomimids, and at least two carnivorous species, including large theropods, like  Appalachiosaurus, and the smaller raptors, like Saurornitholestes.

Crow Shark
The crow shark  Squalicorax has been the subject of some study in recent years. Its teeth are ubiquitous in Upper Cretaceous (90 to 65 million-year-old) fossiliferous deposits throughout the World.  Squalicorax was a scavenger, constantly patrolling the sea for the dead and dying, including large fish, sea turtles, giant marine lizards called  mosasaurs, and floating dinosaur carcasses.