Rabbit hemorrhagic disease (RHD) is caused by a virus in the calicivirus family. The first strains of rabbit hemorrhagic disease virus (RHDV) discovered in 1984 exclusively affected wild and domesticated European rabbits. Rabbits native to North America apparently were not susceptible to the previous two major viral subtypes: classical RHDV and RHDVa. A novel strain, RHDV2, was first found in Europe in 2010, and it spread to other parts of the world. The first North American detection of RHDV2 was in Canada in March 2018. It was then detected in domesticated or feral rabbits from several states within the USA over the next two years. It was uncertain if our wild rabbits would be susceptible to the RHDV2 strain. However, by spring of 2020, it was found to have apparently killed wild rabbits in New Mexico, Arizona, Colorado, Texas, and California. As such, we should assume our native eastern cottontail and swamp rabbits can be susceptible to RHDV2.

RHDV are highly contagious in rabbits. The virus enters the body through the mouth, nose, or eyes (mouth likely most common). The virus persists in the environment for long periods of time and is very resistant to deactivation. It is transmitted by direct contact with infected live or dead rabbits and likely through feces, urine, blood, respiratory secretions, and some insects and blood-feeding parasites. The virus may also be transmitted through contaminated food, water, and other materials in the environment. Humans may be able to move the virus on contaminated clothing or by transporting live or dead rabbits. It may be possible for scavengers and predators to move the virus after consuming infected rabbits, but information is still lacking on this. Rabbits that recover from the disease can shed the virus for at least a month. Humans, pets, and livestock other than rabbits are not susceptible to RHDV.

RHD may cause large-scale rabbit die-offs. Mortality rates from RHDV2 may range from 5 – 70% (20% average in experimentally infected rabbits). Similarly, Tularemia (bacterial disease) can also cause relatively large, localized mortality events. A possible field diagnostic for rabbits suspected to have died from RHD is presence of blood around the nose and mouth caused by internal bleeding, although this is not definitive and may not be present in all cases. Fresh carcasses may be submitted to a suitable laboratory for diagnostic examination and confirmation. However, precautions should be taken when handling rabbit carcasses to avoid spreading RHDV or possible Tularemia exposure (which does have human health implications). Presently, RHD vaccines are not readily available for application in domestic rabbit production in the USA.

It is difficult to completely remove all risk of moving the virus Hunters are encouraged to field dress rabbits at the site where harvested or bag and dispose of entrails and carcasses in trash if dressing harvested rabbits at home. It is suggested that a 10% solution of household bleach with active ingredient sodium hypochlorite (e.g., one cup of bleach diluted with nine cups cold water) be used to disinfect surfaces as means to deactivate the virus if it were present. However, these viruses are protected from disinfectants when contained within internal organs, muscles, and other tissues. The virus can be also present in feces, bodily fluids (blood, urine, etc.), and even fur.

Collecting Samples in the Field

If possible, contact a wildlife agency for advice if you encounter wild rabbits that may be suspected of dying from RHD. However, sometimes time is a factor for collecting and maintaining integrity of specimens. Scavengers and deterioration may result in loss of samples if not collected promptly. Take precautions if you collect samples. Only fresh carcasses can be collected for diagnostic examination and should be triple bagged in sturdy, tightly sealable plastic bags (such as commonly available zipper type freezer or food storage bags). Bagged samples must be kept cool (NOT FROZEN) under refrigeration or in a cooler with ice packs until samples are collected for shipment. Use disposable gloves if necessary to pick up any carcasses for bagging. Take care to avoid or at least minimize getting hair or fluids on the outside of the bag; even when using gloves it may be helpful to turn the collection bag inside out as described below to reduce contamination of the outside of the bag. Carefully remove gloves to avoid contaminating hands and bag and dispose of used gloves in trash. Seal the sample bag and place in a second bag. Seal second bag and then place in a third bag and seal. If gloves are unavailable, a plastic bag can be turned inside out to grasp specimen and fold sides back over to seal and triple bag. 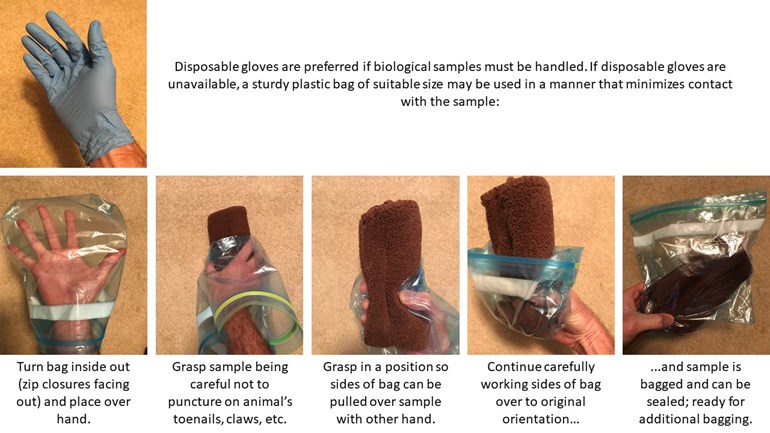 Contact the MDWFP at (601) 432-2199 (Monday - Friday, 8 am - 5 pm) or email Rick.Hamrick@wfp.ms.gov if you find more than a few dead rabbits with no apparent explanation for cause of death. Particularly since this is a relatively new disease, state wildlife agencies are monitoring for presence of RHDV2. For more on RHDV2 best management practices for domestic rabbit keepers, refer to Mississippi Board of Animal Health's Rabbit Hemorrhagic Disease resources.