Turkeys in the Pines 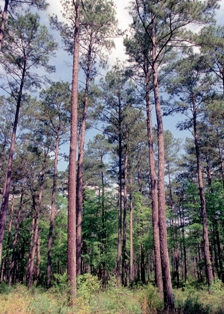 It was early morning and I was sitting in a small blind, waiting for the meager rays of the January sun to warm me up. I glanced down the narrow dirt road in front of me and picked up some movement. Sure enough, it was a gobbler, then another, and another? 8 in all! The flock of mature gobblers began moving to the bait site as I picked up my binoculars and noticed a couple of the birds had wing tags. The gobblers fed at the corn pile for a few minutes and then disappeared into the pine plantation across the road. What a thrill to see 8 mature gobblers up close and personal! The next summer, I was sitting on the tailgate of a pickup, with several other Mississippi State University graduate students. As we talked, we heard the unmistakable sound of a cannon net being discharged. We piled into a truck and raced to the capture site where we saw several turkeys under the net, and John Forbes, the student in charge of the project, working the birds out of the net. We quickly unloaded and helped John retrieve, radiotag, and finally, release all the captured birds.

All this activity was part of an intensive study of wild turkeys by Dr. George Hurst, and his graduate students, conducted on land owned by Weyerhaeuser Company in east central Mississippi, during 1986 - 1994. The objective of this work was to examine ecology of wild turkeys in a managed forest landscape dominated by of short rotation (30 -35 years) pine plantations, specifically grown for timber production. Why study turkeys in pine plantations? At one time, it was thought wild turkeys could not survive in these highly modified, forest environments. And, with the acreage of pine plantations in the Southeast expected to increase to 46 million acres by 2030, the need to understand turkey ecology in these landscapes is evident. So the question remains: Can turkeys make a living in intensively managed pine systems?

In this article, I will examine the evidence from previous research, especially the above mentioned study, to answer this question. But first, we need to "set up" the story. Because private landowners in the South, industrial and non-industrial, are highly variable in their approach to growing pine trees for timber, it is impossible to speak for all of them and how their activities affect turkeys. So, I will start by describing the typical timber cycle on the area Dr. Hurst studied turkeys in Kemper County, Mississippi so that you can get an idea of the type of habitat I am talking about. This area is typical of lands managed by Weyerhaeuser Company, whose market niche is high quality logs from pine sawtimber, across the 3 million acres of its ownership in the Southeast, and may differ from plantations systems of other Companies and individuals.

After the existing forest stand has been clearcut, the site is prepared for planting of pine seedlings. Weyerhaeuser generally uses low intensity site preparation methods, creating beds using a subsoil ripper (to break up stumps) and a plow. As the young seedlings grow, so does other early successional vegetation such as other young trees, grasses, forbs, blackberries, etc. In about half of the new plantations, we apply a single herbicide treatment of Arsenal® at 2 years of age to reduce competing vegetation so the pine trees can quickly grow above the weeds and briars. With a single herbicide application, the non-pine vegetation starts to grow again the next growing season and, because legumes and blackberries are resistant to Arsenal®, the herbicide treatment provides habitat for many wildlife species. After about 9 years, the young pines have expanded their canopies enough to begin shading out other vegetation. Left in this condition, the stand would eventually lose much of the undergrowth that provides wildlife habitat. However, at 11- 18 years, these trees are thinned, i..e, many of the young trees are harvested to provide pulpwood. This opens up the canopy and promotes a resurgence of herbaceous growth. Fertilization of some stands after thinning also helps the undergrowth to take off. A stand 2 - 4 years after thinning is characterized by a diversity of low growing forbs and sprouting hardwoods. By 5 - 7 years after thinning, the understory grows into a midstory and the herbaceous vegetation is replaced by a layer of thick cover, especially briars and sapling hardwoods. At this point the pines simply are allowed to grow. At age 20 - 23, the stand is thinned again, which further reduces the pine overstory and sets back succession to the forb/weed stage. On occasion, stands are thinned a third time and then the remaining trees are carried until final harvest (clearcut), when the cycle starts again. Frequent and intensive thinning, and clearcuts, continually set back succession to a weed/forb stage, providing important habitat for wild turkeys and other wildlife. 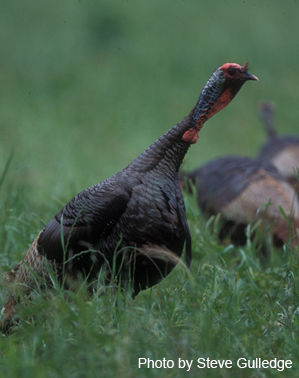 Although managed forest landscapes are dominated by intensively managed pine stands, other habitats persist either because they are unique sites, are on unoperable areas, or have some other ecological or cultural significance. The most common of these habitats are Streamside Management Zones (SMZ), which are unharvested buffers along creeks and streams that protect stream quality, provide a hardwood component on the landscape, and maintain a mature forest component when the adjacent plantations are harvested. In some areas, SMZ and other special habitats may constitute 25%, or more, of the ownership. Although intensively managed areas are often referred to as "pine monocultures," a diversity of different-aged plantations, intermixed with non-plantation habitats, usually produces a very diverse complex of habitats.

The study in Kemper County was the most comprehensive look at turkeys in an intensively managed pine system. The only change in forest management from when this study was conducted is a change in prescribed burning (see below). During the Dr. Hurst study, prescribed burning was used to reduce fuel loads and to reduce competing vegetation in pine stands. Today, due to smoke management and liability concerns, prescribed burning is used largely to reduce fuel loads in high arson areas and limited burning is conducted specifically for wildlife habitat improvement. However, gone are the days when most stands were burned every 3-5 years. So, it is important to keep this change in mind.

The Kemper County turkey study provides examples. The study in Kemper County found that (1) over 80% of nests were located in 13 - 20 year old pine plantations and nests were located more frequently in pine stands than in natural stands, (2) poults 1 - 14 days old used 14 - 20-year-old plantations that were thinned and burned an average of 3 - 4 years prior (3) ancillary observations of turkeys occurred in plantations 88% of the time and all nests and most broods used plantations, (4) SMZ were an important habitat feature for wild turkeys, (5) survival rates of hens on Kemper County were similar to those in more "traditional" habitat, and (6) turkeys were more likely to use plantations that had forest access roads in, or adjacent to, them. The conclusions drawn were that plantations, mostly 13 - 18 years old and burned and thinned at least once, were selected by hens for nesting and brooding over other habitat types, that the most important phase of wild turkey ecology, the reproductive phase, occurred mostly in plantation habitats, and that SMZ and forest access roads were an important habitat component. Another conclusion, supported by similar research in Alabama, was that hens accepted a wide range of conditions within plantations, attesting to their adaptability. In a 1991 scientific paper, Dr. Hurst determined plantation-dominated landscapes could support huntable populations but did recommend maintaining areas of mature hardwood and pine-hardwood.

Now for the important question. Sure, plantation systems can provide adequate habitat, but how many turkeys can be supported? Graduate student Mike Weinstein determined hen density varied from 0.4/mi2 - 1.2/mi2 and gobbler density varied between 0.1/mi2 - 0.8/mi2 on the Kemper County study area. These densities are comparable to turkeys in other areas and higher than densities in many areas. Densities for hens and gobblers combined from other areas were: 0.1/mi2 (NH), 1.5/mi2 (KY), 0.2/mi2 (NC), and 0.5/mi2 (TN). In Alabama, on an area with < 10% openings, density was about 0.4 turkeys/mi2 and in heavily forested areas of Missouri, turkey density varied from 0.2 - 2.2/mi2. On areas composed of >10% openings, turkey densities can be much higher. Obviously, it is not possible to maintain a large percentage of openings on an area devoted to growing trees. So, densities in Kemper County were similar, or higher, than those in other heavily forested areas.

Dr. Hurst and his students also conducted turkey research on the Tallahala Wildlife Management Area (TWMA) concurrent with the Kemper County research. My dissertation was the summary of data collected for 13 years on TWMA. Tallahala was in a more natural state, managed by the U.S. Forest Service cooperatively with the Mississippi Department of Wildlife, Fisheries, and Parks, and was composed mostly of mature pine and hardwood forests. We compared turkey reproduction between TWMA and Kemper County, and found that productivity (number of poults produced) was similar on both areas and that nests in Kemper County experienced lower predation rates than hens on TWMA. Pine plantations on TWMA were not preferred habitat. However, these plantations were about 3 - 14 years old and unthinned. These stands were typical of the time pine stands have a closed canopy before being thinned; definitely poor turkey habitat. Gobblers on TWMA preferred young clearcuts, likely due to production of insects and seeds.

What does all this mean? To me, it indicates that turkeys not only can survive in pine plantation systems, but can actually do quite well. Not too many years ago, it was thought turkeys could only survive in extensive stands of hardwood forests. Today, we know that is not true. Wild turkeys are remarkably adaptable and can survive in a wide range of environments. However, I feel that certain practices must be conducted to maintain good populations of turkeys on these areas.

Although it appears turkeys can do well in most pine plantation systems, recent trends in forest industry has caused concern among some biologists.

Some of the concerns are: 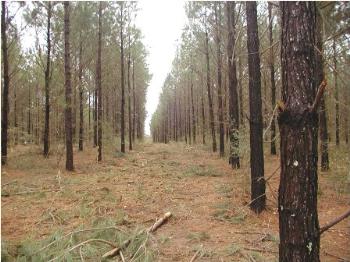 To help ensure turkey needs are met in the future, Weyerhaeuser, in cooperation with Mississippi State University, NWTF, Mississippi Chapter of NWTF, American Cyanamid, and the National Council of the Paper Industry for Air and Stream Improvement (NCASI), has initiated 2 research projects to help address some concerns. The first project will examine effects of burning and herbicide treatments on wildlife and plant communities in pine plantations. For turkeys, we will be examining habitat structure, green forage production, and insect production. In a related study, we are building on work conducted by Dr. Hurst using bait site counts to estimate wild turkey reproduction on the Kemper County study area. The goal of this work is to monitor wild turkey reproduction over the long term to see how changes in silvicultural practices (mainly reduction of prescribed burning) may affect wild turkey reproduction. Results from these studies will be helpful in integrating wildlife needs, including turkeys, in future forest management plans.

Just as a note, it is important to remember that forest industry only owns 14% of U.S. timberlands; non-industrial owners control over 55% of U.S. Timberlands. So, although forest industry is working to provide wildlife habitat and is always under public scrutiny, the small, private landowner holds most of the pieces of the habitat puzzle. Although the future for turkeys looks secure for now, other threats are out there. Increased urbanization and loss of habitat is the greatest threat. By maintaining areas in forest, industrial and non-industrial forest landowners are helping to ensure that most turkey habitat will not become human habitat. Although pine plantations systems have different habitat quality than older, mature forests, both are infinitely better habitat than parking lots and backyards. As demand for forest products increase, the challenge of producing wood and managing wildlife in the same forest will increase. With careful planning, we will be able to continue to do both.