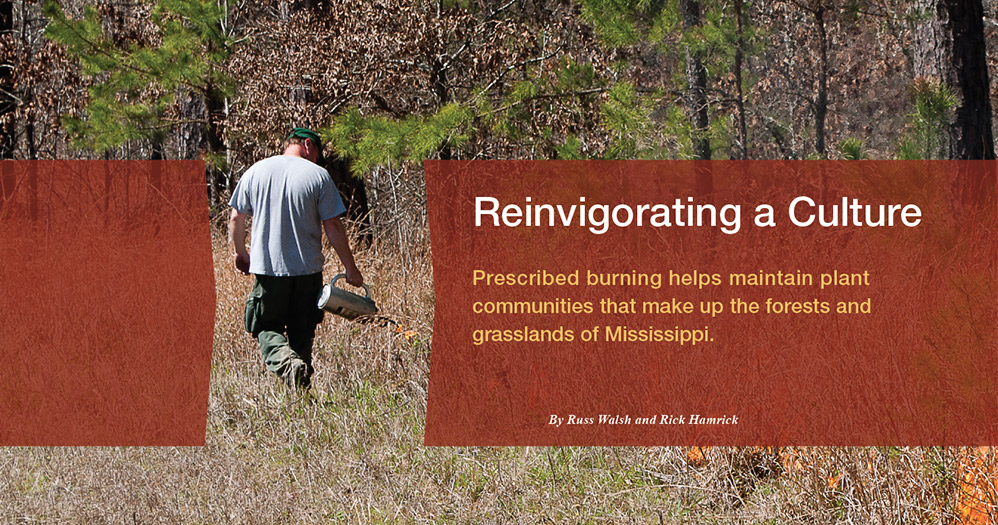 Claiborne was witness to a vibrant ecosystem that was shaped and maintained by centuries of frequent fire. Native Americans readily burned forests and grasslands for warfare, hunting, brush clearing, and other uses. Early European settlers recognized the significance of fire on the landscape and continued the practice. Fire was not only an indispensable tool for generations of Southerners, it was a deep-rooted part of the culture.

The early 1900s brought stiff opposition to the widespread use of fire across the Southeast. The Dixie Crusaders were a group of anti-fire zealots sent to rail against the “evils” of woods burning and promote forest fire prevention. Their revolutionary propaganda was relentless in influencing the younger generations’ sentiment toward fire. This wave of anti-fire campaigns would be followed by the now-infamous message of Smokey Bear. Collectively, these efforts would be widely successful in instilling a lasting fear of woods burning and severing fire from the landscape. Today, the absence of fire in Mississippi’s forests and grasslands is glaringly evident. 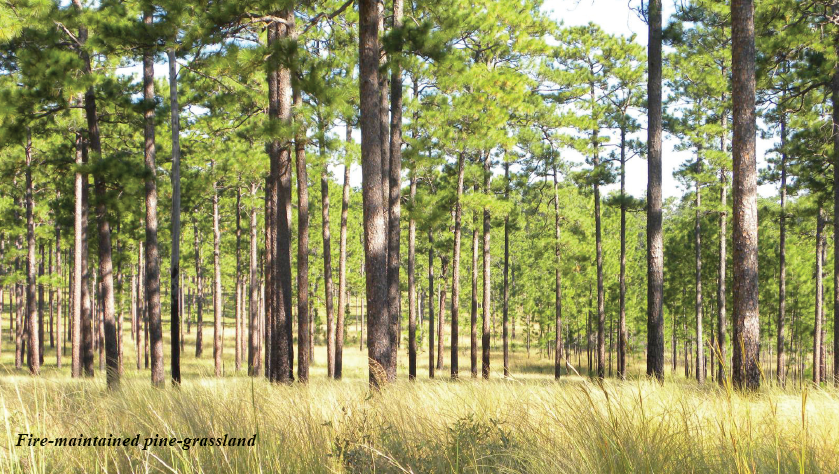 Before human intervention, natural fires were most likely initiated by lightning strikes during drier conditions of late spring and summer months. Depending upon weather patterns, fires probably occurred regularly at times and kept fuel loads at a low level so that fire intensity was low to moderate. However, during drier times, natural fires might have been intense and burned extensive acres.

These periodic fires maintained the plant communities that make up the diverse and unique forests and grasslands of Mississippi. Many native trees, grasses, and herbaceous, broadleaf plants are adapted to fire and even depend upon it to persist. Fire exposes soil for seed germination, increases growing space by reducing woody competition and plant litter, recycles nutrients bound up in dead plant residue, and stimulates germination of some seeds. Depending on fire frequency, intensity, and timing, fire alters plant communities by impeding the growth of some species and favoring the growth and persistence of others. In the absence of fire, less fire-tolerant vegetation begins to colonize sites and can become dominant when fire is excluded for long periods of time—a condition that is often exhibited at present.

Just as plant communities were shaped by fire, many wildlife species depend upon periodic burning to maintain structure and composition of habitats necessary for them to thrive. Wildlife populations might have fluctuated with the frequency of natural fires or other disturbances that affected plant communities to which they were adapted. However, as fire decreased on the landscape, many species markedly declined with the loss of suitable habitat. For species such as bobwhite quail, gopher tortoise, Bachman’s sparrow, etc., an increase in populations is highly dependent on increasing fire use on the landscape.

Early Mississippi inhabitants faced fewer challenges than fire practitioners of today, thus little planning was required. Given today’s urbanized landscape and a cultural fear of fire, burning on the landscape is a much more involved process. “Prescribed burning” in the present-day context is defined as an intentionally set, but planned and carefully managed fire to accomplish specific objectives. Thus, prescribed fire must be used in a manner that makes every effort not to pose a danger to society or property. Fire should certainly be respected, but not necessarily feared. 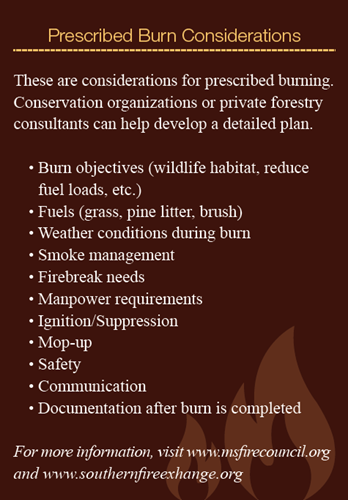 Fire must be used as a management tool to improve wildlife habitat, forest health, and mitigate wildfire risk. Multiple national forests and wildlife refuges in Mississippi are large, fire-maintained landscape that provides these functions. However, 78 percent of Mississippi’s landscape is privately owned; thus, to restore fire-maintained ecosystems at a large scale, private land must be engaged in prescribed fire efforts.

However, the lack of landowners engaged in fi reapplication is a significant hurdle. Further, private land parcels continue to decrease in size, thus increasing fragmentation of fi re-suited habitats. Conservation partners recognize the lack of for-hire burn contractors, and thus the critical need for more landowners to become certified and sufficiently experienced to conduct their own burning. The Mississippi Prescribed Burn Act of 1992 recognizes prescribed burning as a landowner right and provides a sound legal platform for certified burn managers. Thus, partners are continually working to provide educational and technical training opportunities to encourage land-owners to become burn managers. 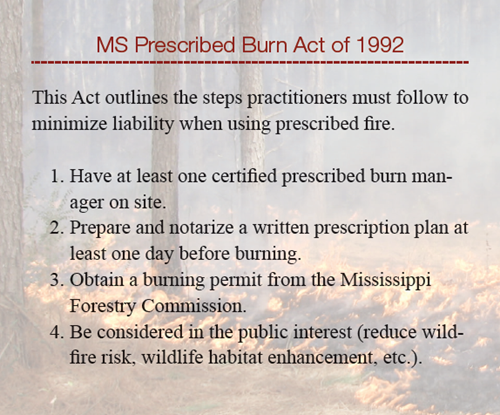 Claiborne would find a markedly different landscape if he traveled the Magnolia State today. The forests and grasslands he viewed were shaped by robust force that was ingrained in the Southern culture. Ultimately, to have sustained use of fire on the landscape, the fire-culture must be reinvigorated among landowners and the general public. The picturesque piney woods and heart-racing quail covey rises depend on it.

Russ Walsh is the MDWFP Wildlife Bureau Director. Rick Hamrick is a Habitat and Small Game Biologist with MDWFP.