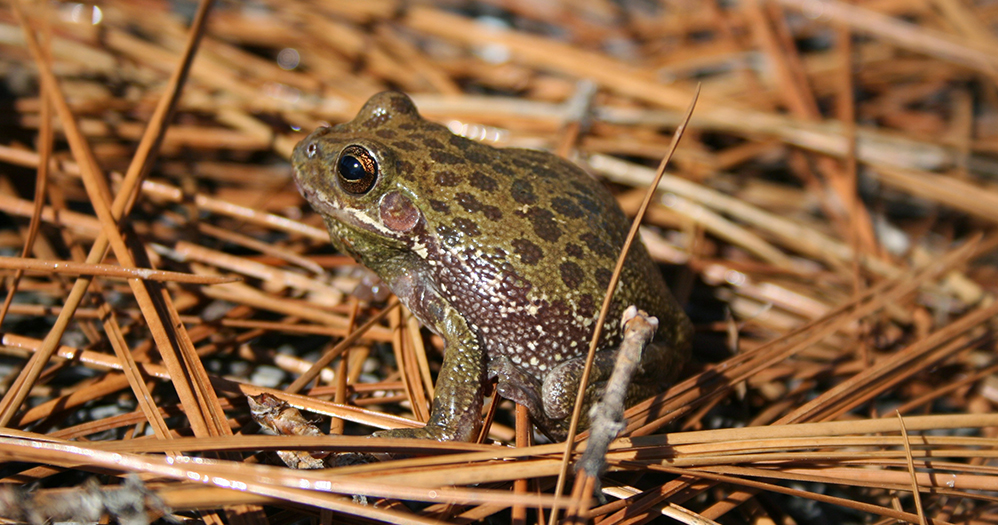 The barking tree frog is the largest native tree frog in the United States. The adult size ranges from 2-2¾ inches and can live for more than 10 years. This frog is distinguished from similar-looking Mississippi tree frogs, such as the squirrel tree frog and the green tree frog, by its heavy body, rough skin, and presence of dark circular spots all over its back. The skin color can vary from lime green to brown, and the intensity of the spots can vary as well.

Like other tree frogs, the barking tree frog has round, sticky pads at the end of its toes. These toe pads excrete a mucus that allows the frog to climb smooth and rough surfaces with ease. Barking tree frogs breathe through the lining of their mouth and their skin as well as their lungs. The exchange of carbon dioxide and oxygen (respiration) is much more efficient in a moist environment, which is why frogs have wet, slimy skin. 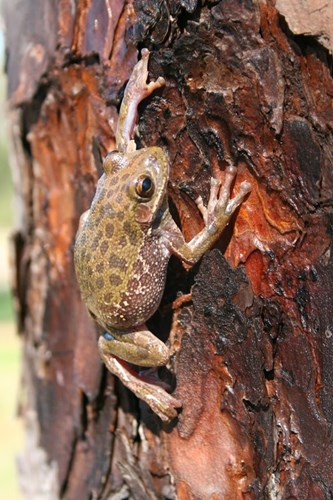 In Mississippi, barking tree frogs are found primarily within the Pine Belt, located in the southern third of the state. Their preferred habitat includes grassy, temporary ponds that dry up during periods of limited rain, surrounded by sandy pine savannas. They can also be found in lowland forest wetlands and swamps. During the active season, they seek shelter and food high in tree canopies, then burrow underground in sandy soil over winter and during periods of drought.

Breeding occurs from March to August, with a peak in early summer. Most other tree frog species call from vegetation surrounding their breeding site, but male barking tree frogs inflate themselves for buoyancy and call from the water. The call of “Tonk” or “Donk” is repeated every one to two seconds. When a full chorus erupts, it sounds like a pack of dogs barking. Once a male has found a mate, the female lays 1,500-4,000 eggs that typically hatch in around a week. The resulting tadpoles feed on algae and can grow more than 2 inches long. This life stage is a dangerous time as many tadpoles are lost to disease and predators, such as aquatic insects, fish, snakes, and turtles. The surviving tadpoles will change (metamorphose) into froglets that are 3/4-1 inch long, and their diet also changes from algae to insects. After metamorphosis, if they can avoid being eaten by snakes, birds, and mammals, it will be two to four years before they reach maturity and return to the wetland to breed.